Will you still support your local cinema theatres?

I think this Premium Video On Demand service (check above link) rolling out after the 60 days of the theatrical release seems okay now, as most of the sales earnings are done within few weeks of release. But what it will eventually lead to is discourage people from visiting the theatres all together (which is already happening slowly), as they need to wait only 2 months to watch the movie rather than 4 months which is the case for DVD and Blu-ray.

Most regular cinema buffs will continue to watch their anticipated movies during early opening weekends. But how will this affect the masses whose might choose late yet easier accessibility over early screenings?

Yes I am annoyed with people who talk on cellphones in the theatre, who give running commentary during the movie, who loudly consume their food and drinks, who bring little babies to the theatre.

Of course then there is the expensive ticket prices. Also I rarely eat at the theatre, not only because it is expensive but cause it's a distraction while watching certain movies. If I want to eat, I will eat somewhere else before or after the movie.

There is no escape from the ticket cost, but the rest of those annoying scenarios do not happen all the time.

In the end, I still prefer and enjoy watching movies at the theatre for the big screen, surround sound and sometimes for the communal experience. Yes it is not crucial for all type of movies, but there are quite a number of them through the year which are worth the ticket admission.
Posted by Vivek at 7:28 AM 0 comments Links to this post

The Profiles in History Hollywood Auction 44 will be held May 14-15 at Saban Theater in Beverly Hills. 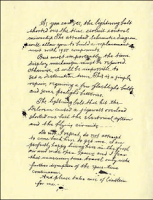 100% of the proceeds to benefit earthquake victims in Japan through Red Cross.

Portrait measuring approx. 19 in. x 25 in., in colored pencil and acrylic.

Winning bidder to choose the movie star or personality of his/her choice, the artist chooses the specific likeness and composition so that it is the artist's vision.


Source: Original Prop Blog
Posted by Vivek at 8:31 AM 0 comments Links to this post

Email ThisBlogThis!Share to TwitterShare to FacebookShare to Pinterest
Labels: back to the future, bttf, profiles in histroy, props, struzan

Why Space Travel is still important

On the 50th anniversary of the first human space flight, completed by Yuri Gagarin lead to this discussion on the RPF forum about the importance of space exploration, which promoted me to jot down my thoughts on this subject.

Let's forget about Mars colonization, lunar base or manned space flight and for a minute just focus on satellites. When rockets were designed and launched in the 1950s, did they built them cause they expected to achieve rapid communication and broadcasting, high-speed exchange of information and data? No, all those inventions and technologies progressed after the evolutionary cycle of rockets, leading to the launch of the first satellite Sputnik and eventually having hundreds of artificial satellites floating around our planet. Many of which are playing a key role in our daily life activities.

RPF Member tripoli listed some good examples as to how space research has resulted in many applications on Earth.

Want a few personal applications? Weather satellites, communications, environmental studies, electronics miniaturization on the computer you are typing on, plastics in almost everything in most households."

Continuation of space flight and research is crucial as it helps to expand our vast potential, which will never be achieved if we choose to abandon space exploration all together. Of course we have so many problems on Earth, that needs to be addressed and worked upon. But that does not mean space travel needs to take a backseat until all other Earth problems are resolved.

Somebody invented the wheel, leading to carriages and eventually automobiles. If the Wright Brothers and inventors like them decided that we have enough successful transportation systems for local travel and ships to move around the world, aviation would never see the light of the day and space travel would have remained a science fiction idea.

Going to Mars is not just about discovering resources and establishing colonies, the struggle to reach Mars will involve overcoming so many hurdles that will itself lead to many new inventions and discoveries. Better spacecraft, alternative fuel, reusable launching rockets resulting in saving millions of dollars for future rocket launches.

If a natural calamity hits a city in the world, there are airplanes to take people across to another city for safety. If a natural calamity hits the entire planet, where are we going to go? Yes, it may not happen in our lifetime now, maybe not even for another few hundred years, so why should we bother? If the people and inventors in the past had that approach and attitude, can you imagine how we would be living in a world without aviation and satellite communication? Of course we can live without them, people have done that for centuries, but it's better now since we don't have to do that.

It saddens me that in the 50 years of manned space travel, there have been very few from India who have traveled into Space. But this recent discovery of the biggest lunar cave by the Indian spacecraft Chandrayaan-1 is stepping in the right direction.

In the 1960s, it was a race between US and Soviet Union. Now with the International Space Station and other space programs it is a collaboration between them and eventually among other countries as well.

I will conclude this post with the following video, which is fan made promo for NASA using the words of Carl Sagan. (Original video and music credited to Michael Marantz)

Posted by Vivek at 7:31 AM 0 comments Links to this post