I am glad that I downloaded Django Unchained

As someone who is always advocating people to watch movies at the cinemas, I am glad I decided to watch Django Unchained for the first time through the downloaded copy back in January.

Quentin Tarantino has crafted a fantastic and compelling film which is non-stop entertaining, while being able to do the transition through the tones of drama, comedy, suspense and action so naturally. The soundtrack with that compilation of songs is another highlight of the film.

Tarantino's signature style of violence with over-the-top display of blood is a delight to watch and is almost comedic in nature at times. But then there is the sheer brutality of human suffering which is more unnerving. And though those scenes are instances of fiction, it serves as a gentle reminder of the real horror which was apparently more cruel and obviously prevailing during the sinister part of American history.

The movie got released in India on Friday and I decided to watch it again, this time on the big screen. Besides the ridiculous three months late India release for Django Unchained, I knew they will butcher the film here in someways.

The cigarette smoking warning during major parts of the film was so annoying. One of the unsettling scenes in Django Unchained was the revelation of Broomhilda and how she was handled by others. Thanks to Indian Censor Board and Sony Pictures India, that entire scene was cut out due to partial nudity, resulting in Django's state of emotions and the impact of that scene being totally lost on most viewers.

And Sony Pictures India is likely more to blame for the cut, as they probably wanted to make the movie more accessible to everyone. So I guess all the blame is on the Indian Censor Board who didn't want us to witness the scenes. Because we all know human female bodies are so hideous, that everyone including the female audience would be totally repulsed by it. Just remembered, there is also another brief moment where there is male nudity later on which was also cut. Guess they didn't want to seem partial.

The movie was already rated R (Restricted) in US and is meant for mature audience worldwide. So Indian Censor Board's decision to remove that scene was not only censorship of art, but was also undermining the adult viewers in India.

And any smoker above the age of 18 already knows the ill effects of smoking and so does the non-smokers. The audience doesn't need to be preached by the law or government about this. If they are really so bothered about the well being of the citizens, why don't they just ban cigarettes outright? Oh yeah, they can't afford to lose the millions in tax money, so they compensate for that by showing false sense of concern with warnings being interjected in movies and ruining the cinema experience.

Update: Sony Pictures India got back to me and reminded me that Django got A rating and that movies with A rating in India are still open to further cuts by the Censor Board (which I was aware of).

And they confirmed that there was no question of them trying to a wider audience rating by including cuts, as the movie had already received the strictest rating (A) in India. And that if they hadn't accepted the cuts, the film release would not have been possible.

Still in this case I find the cuts baffling cause movies with far more nudity have gotten away without cuts in India. Thanks to Sony Pictures India for their response and it's little comforting to know that they aren't to blame for the cuts. 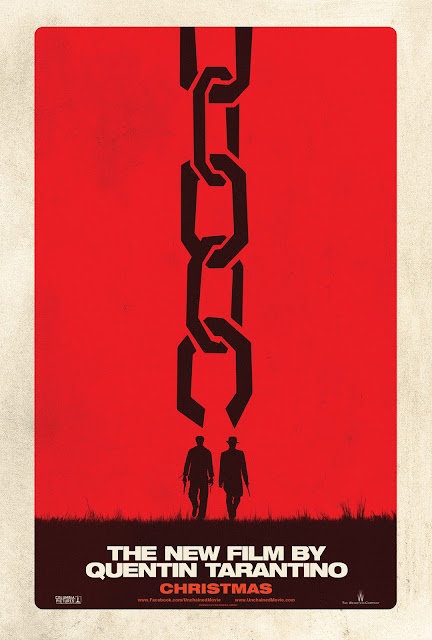 Thanks to Bob Gale, I got my first BTTF autographs

Time Machine Restoration chief Joe Walser already had my mailing address, but I had no idea Bob Gale would be sending me something. I was totally surprised and ecstatic when I noticed Bob Gale's name on the poster tube.

It was so thoughtful of Bob Gale to send me this cool poster and this wonderful personalized letter. A hearty thanks to Bob Gale for taking time to send me the letter and the Back to the Future poster autographed by him, Robert Zemeckis and Christopher Lloyd. On my own, there is no way I would ever get a chance to get all of their autographs on a poster. And a big thanks to Joe Walser and Terry Matalas for having me on the TMR team in the first place.

Now I am wondering whether I should frame this poster or wait until I bring it at We're Going Back 2015 and get more autographs on the poster from the rest of the BTTF cast and crew. See, I am becoming greedy already :-). 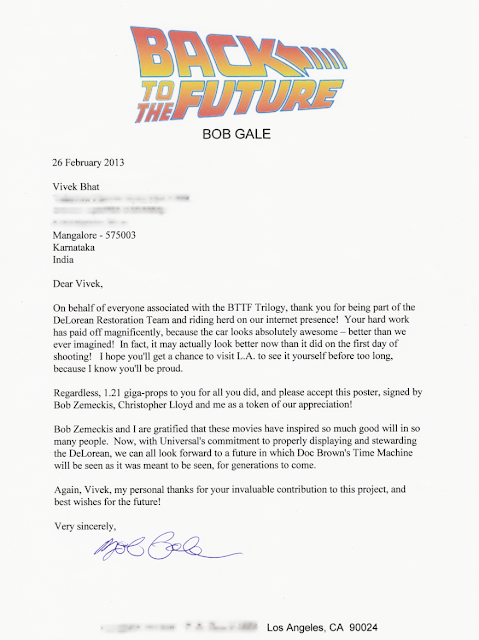 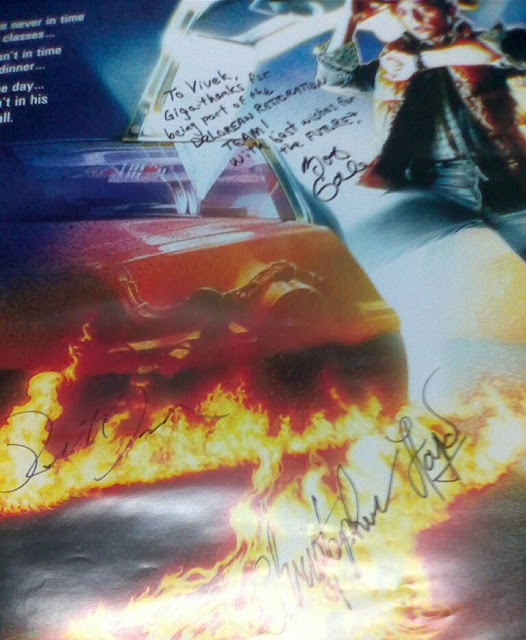