The Wolverine finds the balance of berserk and heart

The Wolverine was good and surprisingly so grounded with its approach to the story and characters for a major portion of the film. Though it's not exactly an faithful adaptation, the movie gives nods to the 1982 Wolverine comic by Chris Claremont and Frank Miller, while borrowing certain elements from it and expands on them.

This is Hugh Jackman's 6th time (5 movies and a cameo) portraying the character of Logan and he still brings something fresh to the character along with his badass charm to it. Both Mariko and Yukio played by Tao Okamoto and Rila Fukushima were good supporting characters, especially with Mariko I was secretly hoping they would go with the comic ending panel.

The story is pretty straightforward but still manages to bring in some intrigue and moments of suspense in midst of the action. For most parts at least until the end, director James Mangold made sure that it doesn't feel like the action is driving the story, thus the action played out quite organic to the story.

The Wolverine is a solid and worthy entry into the X-Men saga and the mid credits scene just builds up the excitement for the next chapter. 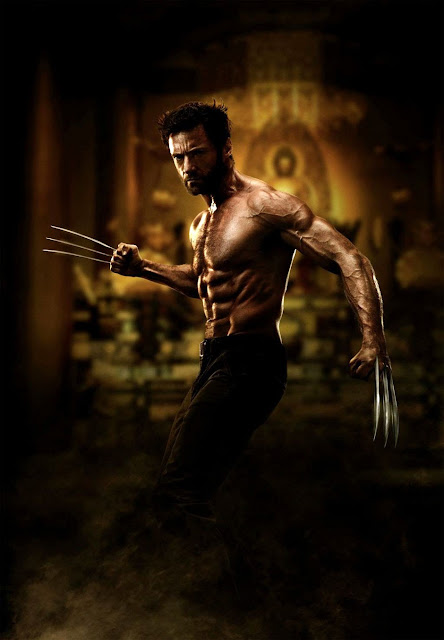 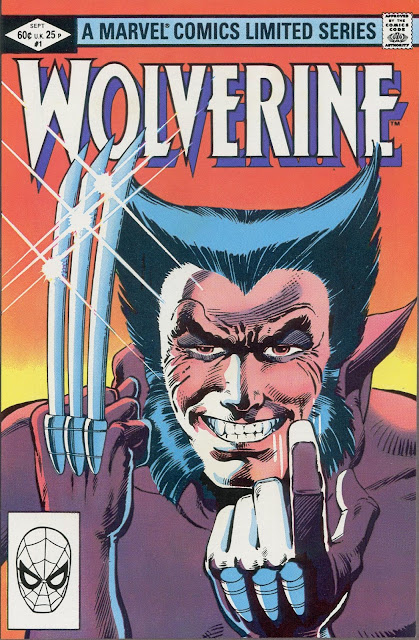 Posted by Vivek at 10:29 PM 0 comments Links to this post

Here are some of the Twitter reactions from the Amazing Spider-Man panel at Comic-Con.

EricVespe: Amazing Spider-Man 2 is up next. Stands a good chance of being the biggest and best thing in the Hall today.

devincf: Sony is doing the multi screen thing for SPIDER-MAN, a la HOBBIT and PACIFIC RIM.

devincf: Garfield is on stage in his Spidey suit. He's staying in character.

ErikDavis: Andrew Garfield is in character as Spider-Man & he's stealing the show. Geeking out on Jamie Foxx movies. "I loved Django!"

devincf: "I got these powers and I have to do something with them and I don't like assholes." - Spider-Man. #SDCC

empiremagazine: They're really going for this Spider-Man-is-real schtick. Garfield sells it. #ComicCon

EricVespe: I can't get over how sweet it is to have Spider-Man actually on this panel.

EricVespe: Foxx said he really wanted Electro to be someone who is the opposite of the jokey Spider-Man. "I want to burn the city to the ground." 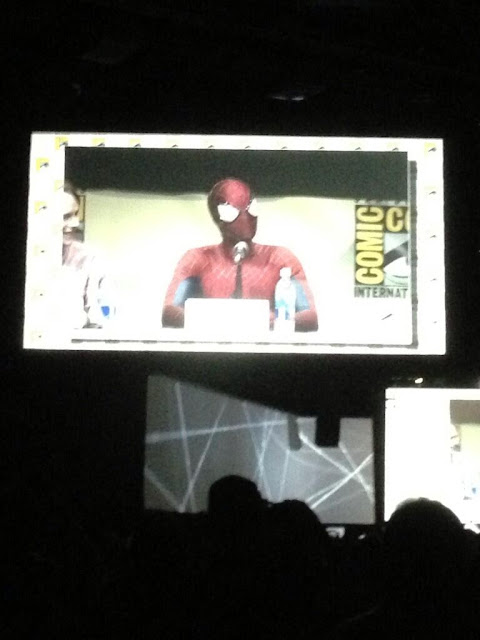 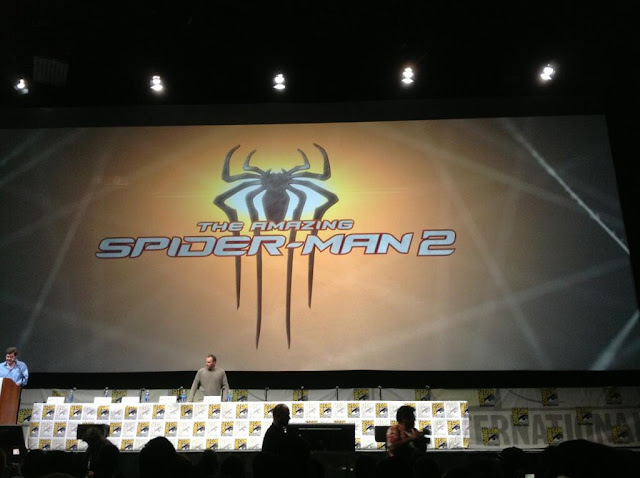 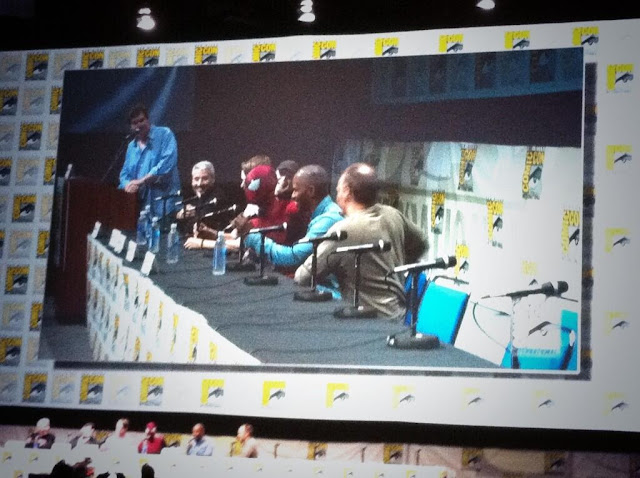 EricVespe: Really impressed with the Amazing Spider-Man 2 footage. Fully away from the Raimi films now with no origin story.

devincf: Electro gets his powers from eels at oscorp. He flies. His power level is enormous - he seems to blow up a bunch of buildings. #SDCC

empiremagazine: Spider-footage: much bigger in scale than the first. Spidey catches a flying cop car like a pro. Quip level upped.

EricVespe: Also, Paul Giamatti screaming in a pissed off Russian accent is awesome. Hope he's more than a footnote in the film.

ErikDavis: The only thing I wanted more of in that Spidey 2 trailer was Dane Dehaan. Only shot of Chris Cooper as Osborn, he seemed to be near death

EricVespe: Yep, Andrew was back after the footage ended, apologizing profusely for being late.

devincf: Nerd in UCB shirt confronts Garfield about being too sexy for Peter Parker. Garfield handled it well, said Maguire is always Spider-Man.

EricVespe: A gay Asian American attendee applauded Garfield for his recent statements about how Spider-Man could be gay

EricVespe: Because of the suit anybody can project what they want underneath, that's the beauty of Spider-Man, no matter what skin color or orientation

devincf: Garfield is one of the best panel personalities in the history of SDCC. He's so natural and funny and personable.

EricVespe: Said it wouldn't make sense for Peter to suddenly be with a black guy in the third film storywise... to which Jamie was all "I'm right here"

ErikDavis: The thing I love most about these new SPIDER-MAN movies is the tone. It's playful and silly, but still really fun & thrilling

Blake Wright: Foxx is humming the Superman theme to a kid dressed as Superman getting ready to ask a question.

EricVespe: I love this panel! This sort of funny energy has been missing from Hall H today.

EricVespe: Webb says he's not tied down to one particular comic series, pulls from both the Ultimates and Ditko/Lee years.

EricVespe: Big Spider-Man fan asks Webb if it's too much having Rhino, Electro, the Osborns, etc. "I don't want another Spider-Man 3."

devincf: Audience applauds guy who is worried that AMAZING SPIDER-MAN 2 has too many characters and villains. #SDCC

EricVespe: "How does Spider-Man touch someone who if you touch him is like touching a thousand third rails?"

ErikDavis: Fan: "What kind of Spider-Man storyline would you like to see in a movie?" Garfield: "I'd like to see him with the Avengers."

EricVespe: Garfield says he really wants to see Spider-Man with The Avengers. "You're not allowed to say that!"

devincf : "I want to see [Spider-Man] in The Avengers," - Andrew Garfield plays to the crowd at #SDCC

EricVespe: Garfield said that meeting Stan Lee for the first time was like meeting Mickey Mouse. "Is it you, O creator of everything great and holy!" 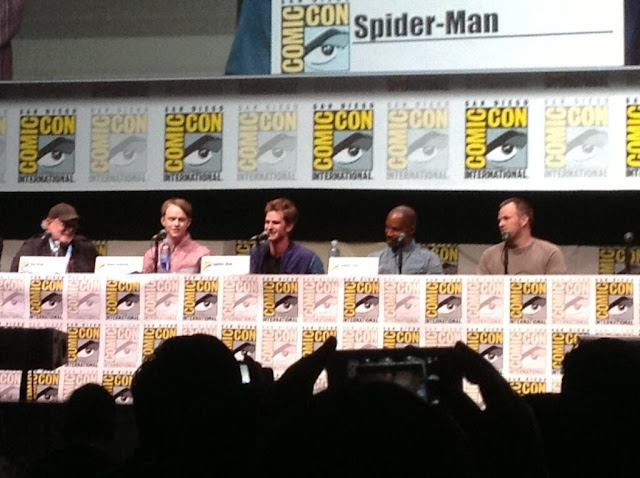 Posted by Vivek at 8:20 AM 0 comments Links to this post

Review: Pacific Rim is Awesome and that is an understatement

Pacific Rim isn't short on action and visual treats. The scenes where the awe inducing scale of the mighty Jagers fighting the nasty Kaijus are indeed the main highlights of the film. But I was quite pleased how the rest of the film managed to keep me entertained with the story.

Though there are some hokey dialogues during few parts of the movie, it didn't put me off in any way.  The human characters in Pacific Rim aren't iconic, but their acts are heroic and they serve the story well. We know their past, their prior battles, so everytime they are out fighting while being inside the mecha, it brings the sense of real danger and anticipation as we are quite emotionally vested in those characters; while marveling at the beauty of the Jagers kicking serious Kaiju ass.

Many seem to have been irked by the characters of the scientists, I for one really liked the character of Newton played by Charlie Day, (maybe cause he plays my favourite character on the hilarious series It's Always Sunny in Philadelphia). Also I really enjoyed the scenes and banter between Newton and Hannibal Chau played by Ron Perlman. Idris Elba manages to express his role with great gravitas and authority.

While most seem to identify the lead actor Charlie Hunnam from Sons of Anarchy, I only knew him as Lloyd, the charming British guy on Undeclared and now quite enjoyed his performance as Raleigh Becket.  Rinko Kikuchi (who was great in both Babel and The Brothers Bloom) as Mako Mori was bit awkward during the initial scenes or are atleast they seem to have been written her character that way, but quickly becomes an admirable character as the story continues. Both made a good team. Mako Mori's younger self played by Mana Ashida gives a remarkable performance in a quite a memorable sequence.

As wonderful as the Jagers vs Kaijus fight scenes were, I wanted to see more in the daylight. Cause there is so much detailed work that went into those designs of creatures and suits, that most of it would go unnoticed. Some of the footage of Kaiju attacking cities were shown in daylight and looked great, but were short in duration. But since many of the creatures had that glowing effect from their bodies, it's understandable that they would look better in the dark.

I liked the score by Ramin Djawadi especially the fantastic main theme of Pacific Rim which also featured music by Tom Morello, the track "Go Big or Go Extinct" which is a variation of the main theme is another one of my favourites.

I will be buying the NECA figures for sure, at least the Gipsy Danger ones in both 7" and the upcoming 18" version. I really want to own a human scale head bust or helmet mask of Gipsy Danger, hope NECA or somebody else makes them.

Warner Bros. and Legendary took a chance with this film and I hope it really pays off for them.

Thanks to Guillermo del Toro and all the artists involved for crafting this gorgeous chapter in entertainment and thanks to screenwriter Travis Beacham for birthing this story and world of Pacific Rim to fruition.

Pacific Rim is the most fun I had at the theatre in 2013 and is my favourite movie of this summer so far. I can't wait to see it again. 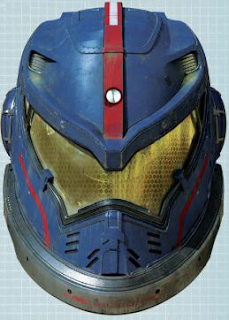 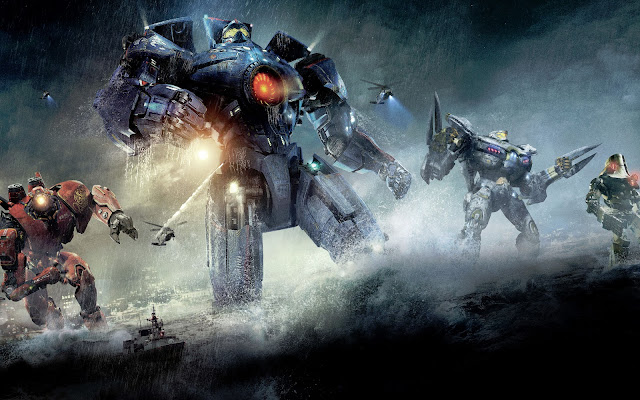 Posted by Vivek at 3:59 AM 1 comments Links to this post