After watching 13 hours of good entertainment like Daredevil, I now want to see more of the other Marvel comic characters get similar series treatment, allowing for richer story arcs and more fleshed out characters. It would definitely work for Spider-Man and his vast number of supporting characters, who will end up with only brief appearances in the movies.

Daredevil series is bloody and violent, perhaps little more than I expected and I am glad they went with that approach. And in the midst of all the grittiness, the show still manages to instill some humor from time to time. Besides the reference to Iron Man and Thor I was glad to see my favourite Avenger being given a shout out as well. The opening credits is cool and elegant, also liked the soundtrack including the different tracks played during the ending credits of each episode.

Jack Murdock had a short early appearance, but still managed to make a strong impact, almost making me want to see more scenes of him and Young Matt. Considering how much of pivotal role the character Karen plays later in the comics, it was good to see her being prominent through this series. But I kept wanting to see more scenes of Claire, also I liked her chemistry with Matt. Foggy is a delight to watch, especially when he is bouncing words with Matt. Since they are only a start up law firm, we got only one instance of Matt being a lawyer in the courtroom, I want to see some more of that.

The series has so many great action moments but the hallway fight in the end of episode 2 was fantastic and is one of my favourites. The way they shot and edited that scene made it seems quite seamless. By the time episode 6 rolls out, the levels of escalation in the story almost feels like a season finale. There is plenty of action after that, but the series comparatively slows down allowing for more drama and character conflicts. The action and pacing does pick up eventually.

Fisk is a villain who like many villains doesn't believe that he is actually a villain. He continues to justify his actions for building a better tomorrow. Maybe he will really embrace his true nature when he takes on the mantle of Kingpin.

As for the costume, the black version really worked well and was able to even highlight Matt's strong muscles and upper body without any additional padding, or at least it appeared that way. As for the red costume I wish they went with a darker shade of maroon instead of the black parts. But I think we will definitely see a better costume upgrade in season 2. 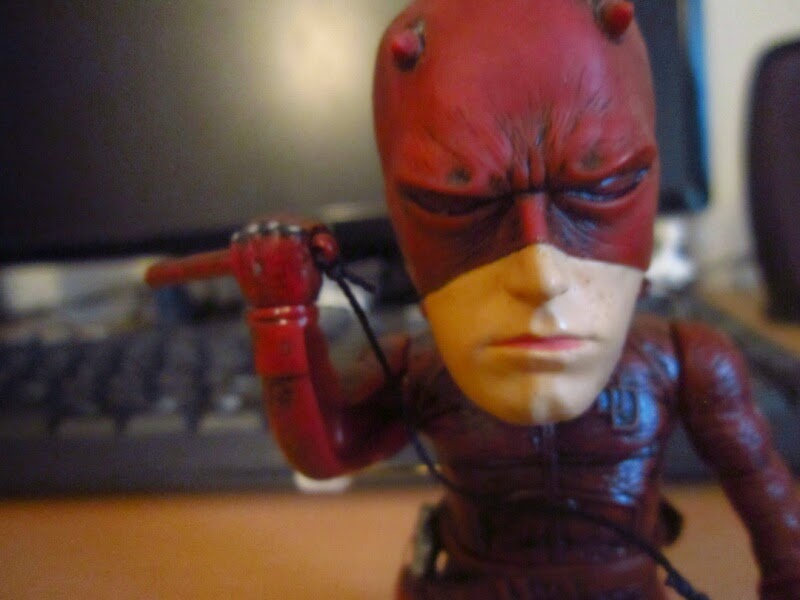 Posted by Vivek at 6:28 PM 0 comments Links to this post