Mondo hints at the possibility of a BTTF and Ghostbusters poster

Back in November 2011, I posted about the Marty McFly art print by Tyler Stout and was hoping that Mondo would someday release a BTTF poster.

Mondo Creative Director Justin Ishmael Interview
Yesterday Scott Wampler from Collider.com posted a great in-depth interview with Mondo Creative Director Justin Ishmael. They talked about the 2011 poster releases, Mondo Mystery Movie Series, things we can expect from Mondo in 2012 and much more. Click on the above link to watch the whole interview.

During the interview Justin answered questions pertaining to Mondo's most requested prints that included Back to the Future, Ghostbusters and Attack the Block. Watch the clip below for Justin's response.

With two new BTTF books already in the pipeline and now with the Mondo BTTF poster, looks like 2012 is shaping up to be a great year for Back to the Future fans and collectors.
Posted by Vivek at 12:18 AM 0 comments Links to this post

Email ThisBlogThis!Share to TwitterShare to FacebookShare to Pinterest
Labels: back to the future, bttf, ghostbusters, mondo, poster

I have stressed this many times in the past that whenever a company decides to release a BTTF product, the one person they need to get on board as a consultant is Stephen Clark. And I am glad to see that Hasslein Books is taking this right approach with their BTTF books.

"I'm pleased to announce that Stephen Clark, who runs BTTF.com, the official Back to the Future Web site, and is one of the main voices of BTTF fandom, will be writing the foreword to my next book, A Matter of Time: The Unauthorized Back to the Future Lexicon, due out in 2012. Welcome aboard, Stephen--it's my honor to have you involved with this project."
Rich Handley (Editor, Co-founder) - Posted on December 6, 2011

Also they will be donating $1 per sale from every Back to the Future book they sell to the Michael J. Fox Foundation for Parkinson's Research, which is another great initiative from the folks at Hasslein Books.

"Paul and I had a great conversation today with the folks at the Michael J. Fox Foundation, and it's official--we'll be donating one dollar per sale from every Back to the Future book we sell."
Rich Handley - Posted on December 17, 2011

Timeline Of The Planet Of The Apes: The Definitive Chronology 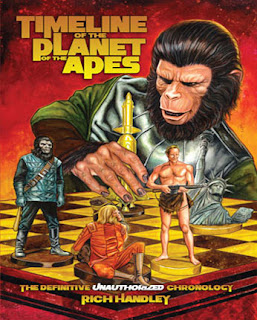 Lexicon of the Planet of the Apes: The Comprehensive Encyclopedia

The original Planet of the Apes film is one my favourite sci-fi films and the recent Rise of the Planet of the Apes film rekindled my love for the franchise. And I was quite ecstatic to find out about this neat connection between the BTTF and POTA franchises, thanks to Charles Bocock who unearthed this unique piece of detail.
Posted by Vivek at 7:41 PM 0 comments Links to this post