Bob Gale recently expressed his concerns on how the Mattel Hoverboard didn't meet his expectations. You can read more about it in his open letter to fans here.

I like most BTTF fans was very pleased to see that Bob Gale addressed those quality issues directly and though he didn't have to, he offered an apology to fans who had pre-ordered the hoverboard based on his endorsement of the product from few months ago. There are few creators especially in the movie industry who even after so many years will go to such lengths to remain thoughtful about their fans. We're really grateful to have Bob Gale on our side.

After reading his letter I directed him to this Mattel Hoverboard thread to show how fans are appreciating his response in the letter. He was glad to see that his comments were taken positively by fans and he mentioned that he never takes his fans for granted. I also mentioned how many fans including RPF (Replica Prop Forum) members offered to help Mattel with all the necessary accurate details (including member Roland who has been offering his accurate hoverboard designs free of cost), none of which were considered by Mattel.

Few members on the RPF were hoping Bob Gale would provide comparison shots between the Mattel Hoverboard and his screen used Hoverboards. He noticed those requests and has now provided the comparison photos along with the following description.


About these photos, and the hoverboards

As far as I'm concerned, the basic design and colors of Mattel's board are just fine.

Bear in mind the following: for the movie we had several different versions of the hero board, based on how it was to be used or seen in the film. Every version was a little different, both in color and material.  Neither of my boards have the real lenticular finish that's seen in some of the movie shots.

One of mine (at left in the 3-shot) is the actual one used in the burning of the almanac scene. It's made of foam and has a wire stand on the bottom so that it could be filmed from above and appear to be hovering. That's why the middle part on the bottom is bigger than the one that Marty takes from the little girl: to accommodate the stand.  It was never meant to be seen in any other way. The round rear pad with the velcro strap was lost.

My other board is made of solid wood. It's a stunt board, and was used by the 2nd unit. I have no way of knowing if it was hung from wires or sat on a piece of pipe. This board has no “magnets” on the bottom or any detail; it too was only to be seen from the top, and only in very wide angle shots.

In the images, you can see how different the green color on the top is between the boards. Remember too that my boards are over 23 years old, and no doubt, the color has changed a bit over the years. Furthermore, in the movie, the colors would look different under different lighting conditions, and was again altered by the normal color correction we did in the film.  This is why no one should be troubled by Mattel's colors.

I hope that satisfies your curiosity! 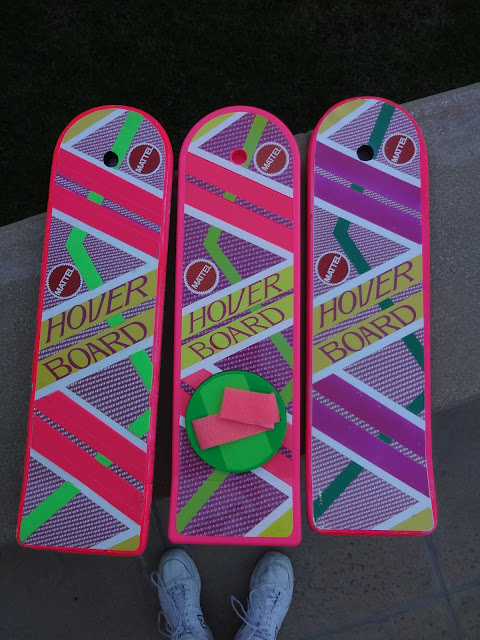 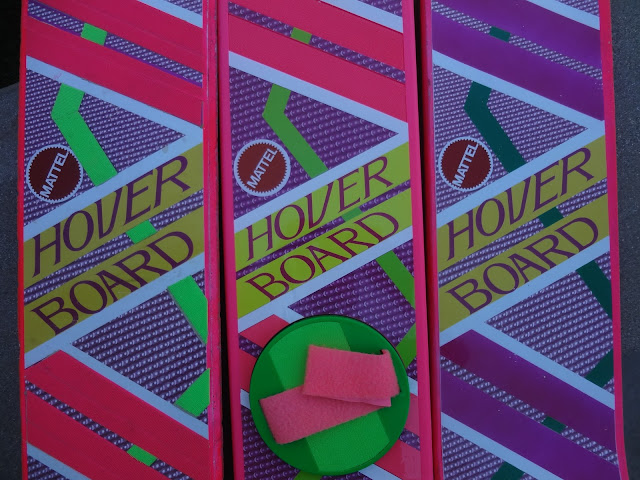 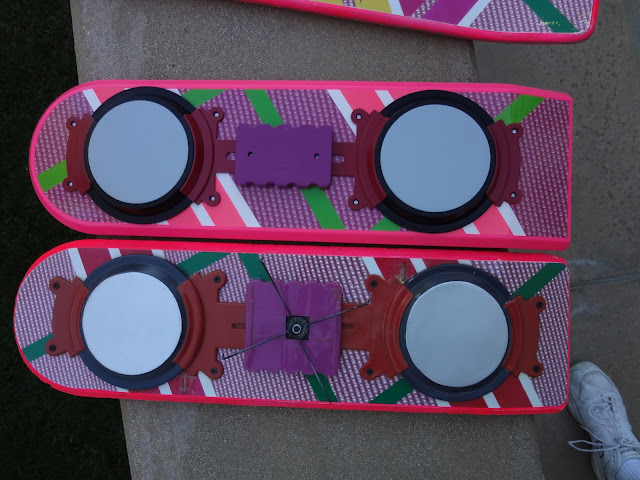 Email ThisBlogThis!Share to TwitterShare to FacebookShare to Pinterest
Labels: back to the future, bob gale, bttf, hoverboard, mattel

I got mine today and I just to say I am so disappointed I just can put it to words. It was so bad the stickers was coming off and they are cut too big so they would not stay down anyway. I love bttf and it just kills me to see this I really wish there was a way to make this better

I canceled my order at the end of November as soon as I saw the early photos and reviews. Jack I would suggest you to contact Mattel to offer you a replacement if not for a full refund. There are some members on RPF planning to design customized stickers to go with Mattel's hoverboard, though that is still work in progress.